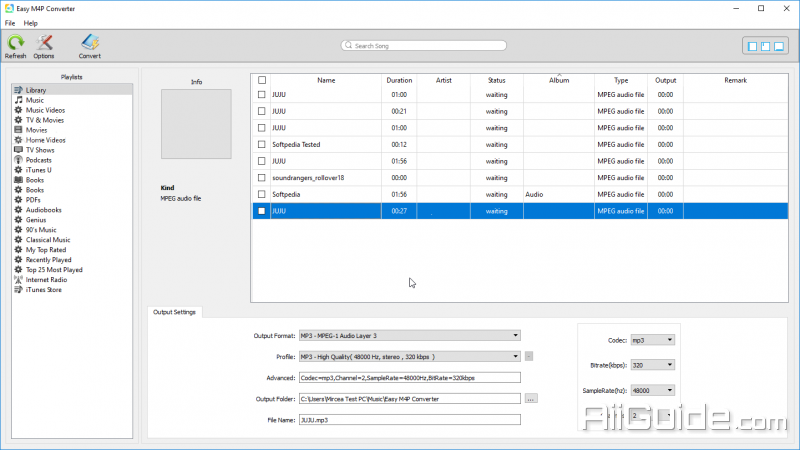 The Best All-In-One iTunes DRM Removal and Apple Music Converter which enables you to remove DRM protection from Apple music and convert both DRM-ed and non-DRM music/audiobooks to MP3 in high quality and fully legally. Fully compatible with the latest iTunes 12 and Available in 7 languages.

Easy M4P Converter is a software that supports converting Apple Music songs in M4P format to less restrictive audio formats such as MP3, M4A, M4R, AAC ... in batch mode; easily remove DRM protection from iTunes M4P. With Easy M4P Converter, users can comfortably enjoy songs and AudioBook without any restrictions on any device. The application works on both Windows and Mac computers.

Easy M4V Converter for Windows runs unbelievably fast on Windows 7 or later. The converting speed is up to 30X faster, which is the fastest speed for removing DRM from iTunes movies than other similar DRM video removal software. In addition, it supports batch iTunes video conversion, you just need to add the iTunes video and let the software to convert iTunes M4V videos without sitting in front of the computer. With this high performance iTunes M4V Converter, you can save a lot of time.

Not only does the function of an M4P file converter in iTunes, Easy M4P Converter is also an efficient audiobook converter, including audiobook AA / AAX on Audible and M4B on iTunes.

- Up to 16 times faster conversion speed

- Fully compatible with the latest versions of Mac OS High Sierra and Windows 10.