Download GPU Monitor 12 for Windows 10, 11 - A Windows 11 and Windows 10 gadget that monitors your NVIDIA or Radeon graphics cards

GPU Monitor is a handy Windows 11 and Windows 10 sidebar gadget lets you monitor the most recent stats of your NVIDIA or/and ATI Desktop Graphic Card. It made especially for the overclockers and gamers. Though GPU Monitor is just a gadget, it provides a good deal of information that you need about Graphics Processor Unit (GPU) installed on your system including Vendor (with icon), Model, GPU, and PCB (Printed Circuit Board) Temperatures, Fan speed (% and RPM), GPU, Video Engine and Memory Controller load, Video memory usage, GPU core, shader and GPU memory clock, PCI Express and mode (NVIDIA SLI or ATI Crossfire) if you have more than one GPU. A comprehensive graph is provided to maximize the delivered details such as virtual memory, temperature, and interface. 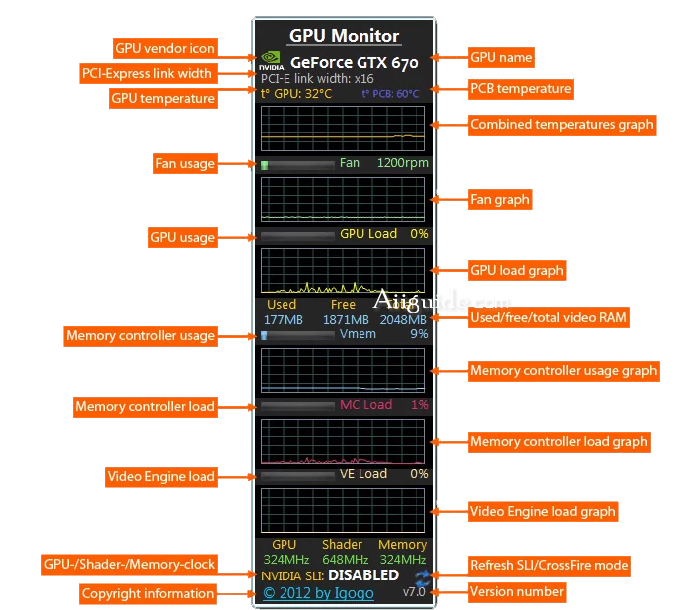 You can easily customize the interface by changing the color, background, and detail of the graphs, if there are multiple GPUs, you can determine which characteristics you want to control, switching between them is done by scrolling the mouse wheel. There are a lot of settings, and if you want to customize everything to your liking, you will have to spend some time on it. GPU Monitor works on both 32-bit and 64-bit systems.