Download LosslessCut 3 for Windows 11, 10, 8, 7 (64-bit only), MacOS, Linux - A video editor for lossless trimming and cutting of videos without losing quality, Simply load the video file and use

LosslessCut is a video editor for lossless trimming and cutting of videos without losing quality. Simply load the video file and use the start/stop cut marks to specify the section that you want to cut. Click on the cut icon and the marked section will be exported to a new video file without any decoding or encoding. 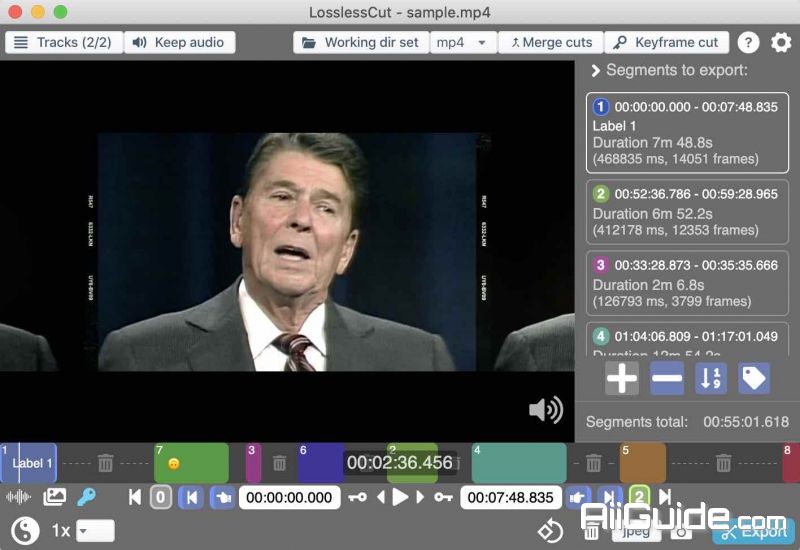 You can also use the program to take a quick JPEG snapshot of a scene. LosslessCut uses ffmpeg (included) for doing all the grunt work.

The main feature is lossless trimming and cutting of video and audio files, which is great for saving space by rough-cutting your large video files taken from a video camera, GoPro, drone, etc. It lets you quickly extract the good parts from your videos and discard many gigabytes of data without doing a slow re-encode and thereby losing quality. Or you can add a music or subtitle track to your video without needing to encode. Everything is extremely fast because it does an almost direct data copy, fueled by the awesome FFmpeg which does all the grunt work.

1: Open a file an export all tracks as individual files

2: Open the exported track files independently and cut them as desired

3: Add the track back to the video and combine them to one output video

Since LosslessCut is based on Chromium and uses the HTML5 video player, not all FFmpeg supported formats will be supported smoothly. The following formats/codecs should generally work: MP4, MOV, WebM, MKV, OGG, WAV, MP3, AAC, H264, Theora, VP8, VP9 For more information about supported formats / codecs,..