Download Paint.NET 4 for Windows 7, 8, 10, 11 - Free image editing and photo manipulation software designed to be used on computers that run Windows 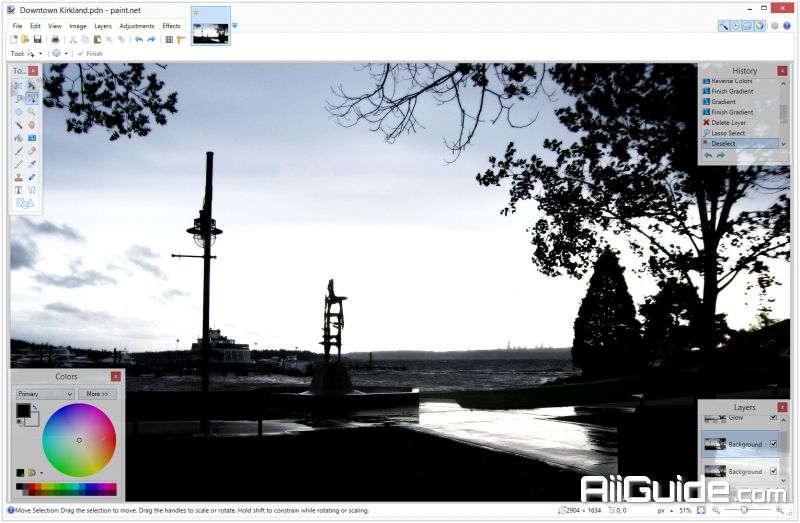 Paint.NET (stylized as Paint.net or Paint Net) is free image editing and photo manipulation software designed to be used on computers that run Windows. It supports layers, unlimited undo, special effects, and a wide variety of useful and powerful tools. It started development as an undergraduate college senior design project mentored by Microsoft, and is currently being maintained by some of the alumni that originally worked on it.

Originally intended as a free replacement for the MS Paint software that comes withWindows, it has grown into a powerful yet simple tool for photo and image editing. The programming language used to create Paint.NET is C#, with a small amount of C++ for installation and shell-integration related functionality.

Paint.NET can be used to enhance and clean up your photographs. Using the Clone Stamp tool, the power lines that criss-crossed in front of the Space Needle were carefully removed. Other operations were performed that had the effect of smoothing out theimage without blurring it, adding some "bloom" (glow), and increasing the contrast.

Paint.net supports plugins, which add image adjustments, effects, and support for additional file types. They can be programmed using any .NET Framework programming language, though they are most commonly written in C#. These are created by volunteer coders on the program's discussion board, the paint.net Forum. Though most are simply published via the discussion board, some have been included with a later release of the program. For instance, a DirectDraw Surface file type plugin, (originally by Dean Ashton) and an Ink Sketch and Soften Portrait effect (originally by David Issel) were added to Paint.net in version 3.10.

Hundreds of plugins have been produced; such as Shape3D, which renders a 2D drawing into a 3D shape. Some plugins expand on the functionality that comes with Paint.net, such as Curves+ and Sharpen+, which extend the included tools Curves and Sharpen, respectively.