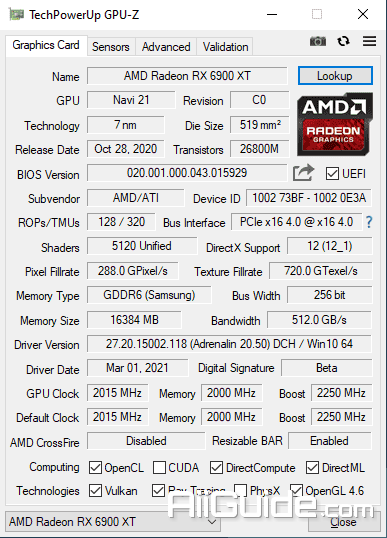 GPU-Z is a lightweight utility designed to scan your computer system and display information regarding video card and GPU. It gets you acquainted with a wide array of technical specification, thus enabling you to have a better knowledge of your computer’s abilities.

GPU-Z features support for the latest NVIDIA and ATI cards and includes a GPU load test to check PCI-Express configurations. In addition, it grants you permission to default clocks, 3D clocks (if any) and overclock information. Reports are incredibly detailed, containing specifications about basically, every characteristic of video cards, such as name, GPU, process technology, chip, memory type, DirrectX / PixelShader support, memory bandwidth, type of bus, memory clock, version driver, sensors, speed fans and version BIOS. You can save the complete report on the sensors as a text files.

GPU-Z is also able to take pictures of the report and export it locally or to a free image hosting service so you can easily share it with your friends across the Internet. Assessing the graphic capabilities of your video card is a very important task. GPU-Z can easily accomplish that for you; it satisfies the needs of the regular home users and professionals alike, such as system administrators.

All in all, hardcore users who constantly need to know what's going on under the hood of their machine are going to appreciate GPU-Z and its accurate reports. Since searching for these results through traditional methods can be a very difficult task, you can use this nifty application to offer you a complete overview of your video card’s graphic capabilities.